Cyclists and triathletes seem to love training on islands! You will often see training updates posted on social media from the old favourites Lanzarote, Tenerife and Mallorca. However, there are plenty of other island destinations less associated with cycling and triathlon but which offer some great training facilities and cycling terrain. So if you fancy a change from the traditional training locations but don’t want to have to travel too far, here are some ideas for alternative European islands. 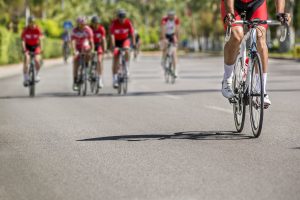 Corsica is situated 170km southeast from the French coast, 90km from the west of the Italian Peninsula, and 11km north of the Italian island of Sardinia. It has been part of France since the 18th century but its proximity to Italy and Sardinia means that it also has an Italian feel.

It’s not the easiest of places to get to, especially out of season but there has recently been an increase in budget airlines flying directly to the island and an alternative is to go to Nice or Toulon and catch a ferry. Once there though, it is a great destination for a cycling holiday.

For a small island-183km in length and 83km at its widest point, there are a surprising amount of climbs for cyclists to tackle. Two thirds of the island is made up of mountains with 21 summits above 2,000m, the highest of which is Monte Cinto at 2,706m and more than 150 cols. In short it’s a mountain range in the Mediterranean! All these mountains means that there are very few flat cycle routes, so it is definitely a destination for budding Queens or Kings of the Mountains! Because of the length of the mountain range, the island is best suited for a touring holiday, staying in a different location each night rather than a single base holiday and the best time to visit is either spring or autumn.

The undulating terrain meant that the Tour de France visited Corsica in 2013 when it hosted three stages as part of its 100th anniversary edition. You might recall the stage finish in the northern town of Bastia where the Orica GreenEdge team bus got stuck under the timing gantry over the finish line! There are no motorways on the island and most of the roads, especially inland are quiet. The road surfaces on the roads that featured on Le Tour are in excellent condition but some quieter routes suffer from potholes and gravel.

Good costal rides are from Calvi to Porto on the west coast and the Cap Corse loop from and returning to Bastia in the north. The road from Calvi to Porto via Piana has been described as the most stunning costal road in Europe and takes cyclists over the Col de Palmarelia to the stunning World Heritage-listed limestone rock formations of Les Calanches de Piana. The coastal Cap Corse route from Bastia circles the northern peninsular, with a mountain spine rising to over 3000ft but don’t worry the highest ascent on the road is only 300 metres. The roads are quiet and rise and fall over the black sand beaches and rocky bays.
The biggest challenge on the island is to climb the 30km route to the island’s highest paved pass, the Col Vergio at 1,478 meters-not even the Tour de France peleton went over this col! The pass is best accessed from the coastal town of Porto going inland towards Corte. The second stage of the 2013 Tour went 156km from Bastia to Ajaccio, crossing the mountain spine in the centre of the island. The route had four categorised climbs with the tallest being the category 2 climb of the Col de Vizzavona at 1,163m and the entire stage can be ridden by experienced cyclists in either one or two days. 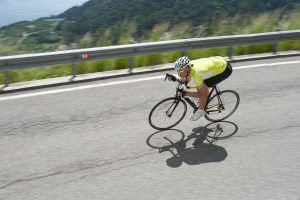 A great island destination for triathletes is Cyprus, the third largest island in the Mediterranean. Cyprus is an ideal location for winter training as temperatures between October and April range between 15°C and 25°C-great workout weather. Cyprus is good for both road and mountain bikers and a real bonus is that unlike other islands in Europe, especially the Canaries, there isn’t much headwind.

There are some package triathlon camps available but the good municipal sports facilities, easily accessible bike routes and of course the sea for open water practice means that you can easily go independently and do your own thing.

The tourist resort of Paphos is a good place for a base as there are good transport links, including an airport and a wide range of accommodation options. Prior to the 2004 Athens Olympics, Cyprus was the location for the Great Britain training camp, which means that there are plenty of modern sports facilities in the resort. That plus easy access to some good bike routes into the Troodos Mountains makes it a great place for triathletes. There are two Olympic size pools in Paphos and three athletics stadiums, of which the Pafiako and Peyia Stadiums were used extensively by the British Olympic Athletics team before Athens. The Coral Beach Hotel has a FINA standard 50m pool, which was built specifically for the Team GB swim team, whilst a second 50m open pool is at the Geroskipou sports centre, which also has an athletics track.

Road cycling is underdeveloped in Cyprus but despite that there are some great cycle routes, especially in the Troodos Mountain region near Paphos. The traffic is quite heavy on the main route out of the resort but once you turn of the main road you are blessed with quiet, well surfaced roads. There are plenty of famous sights that are accessible on bike from Paphos, including a 60km round trip to Ahprodites Rock along the costal road and a 113km round trip a bit further along the coast to the ancient Kourion amphitheatre. If you enjoy riding switchbacks then just north of Kourion is the Kouris dam with breath-taking views and equally breath-taking twists running alongside the west side of the water. It’s also not too far from Paphos to the Akamas peninsula national park northwards along the coast from Paphos.

There are plenty of good climbing routes out of Paphos into the Troodos Moutains, the most challenging of which is up towards Mount Olympus, the islands highest point at 1952 meters. The best route is via the pretty villages of Omodos and Pano Platres which are ideal places to stop for a drink and lunch. The Minthis Hills just outside Paphos also offer decent climbs, including the route to Choulou through either Armou or Episkopi. 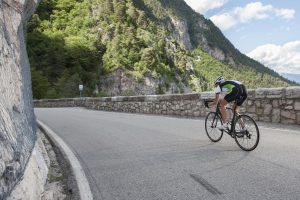 Best for the Glory Hunter – Anglesey

How do you fancy saying that you’ve cycled around an entire island in a weekend or even one day? Sound good doesn’t it. Well one of the most accessible islands for circumventing within a single day is Anglesey. With an area of 276 miles, Anglesey is the largest island surrounding Britain outside of Scotland and was the location of the 2015 Tour de Britain Grand Depart. It is fairly flat and a circular route can be done in just under 110miles. One of the best ways of cycling around the island is to take part in the annual Tour de Mon, the local sportive that sees riders tackle a 107 mile route from Holyhead and back. The benefit of doing the sportive ride is that the route is signposted and marshalled and there are organised feed stops on route which means that you don’t have the worry about getting lost or too hungry!

So enjoy your island training-even if it is of course at home in the British isles!