Bored of swimming up and down your local swimming pool? Maybe you should try one of these ultimate pools to spice up your swim.

Fed up of having to turn in the pool every 25 meters? How about swimming in a pool where one length is over 1km long?

The world’s largest pool is the 12.5 hectare/ 120,000 m² Crystal Lagoon at the Citystars resort in Sharm El Sheikh, Egypt. It surpassed the 8 hectare lagoon at San Alfonso del Mar, Chile, which held the record since 2007.

Citystars is a gated resort made up of retail outlets, residential blocks and hotels, many of which are due to open this year. However, the record for the world’s largest pool looks likely to be surpassed in 2020 by the planned 40 hectare lagoon at the Mohammed Bin Rashid Al Maktoum City project in Dubai.

Travel Trivia: The world’s largest swimming pool (lagoon) is in Sharm ?? Join me for a few laps? #familytravel #tni pic.twitter.com/pgEQYaMPmP

If depth rather than distance is you thing, then you should try diving in Y-40 Deep Joy pool in Montegrotto Terme near Padua, Italy, which is the world’s deepest swimming pool.

The pool, which opened in 2014, is in the Hotel Millepini Terme and is 131ft or 40 meters deep, which is about equivalent to the height of a 14-storey building. It has a constant heat of 32-34C, which means that unlike whilst diving in the sea, you don’t need to wear a wetsuit.

The pool holds 4300 cubic metres of water and as you dive you can either rest or stop at platforms at either 1.3 or 12 metres before heading down a funnel to a depth of 40 metres. If you fancy having a go you can buy tickets from the hotel.

If you are scared of heights then the Marina Bay Sands Infinity Pool in Singapore is best avoided!

The pool, which perches across three skyscrapers, stands 200m/650ft above ground.  Opened in 2010 the 150m pool is part of the Marina Bay Sands complex and not only is it the world’s highest open air pool but it is also the world’s largest infinity pool.

The world’s highest enclosed pool is the rooftop pool at The Ritz-Carlton in Hong Kong. Located on the 118th floor, the pool is a staggering 484m/1,588ft above ground level. Unfortunately, if you want a dip in either pool you will need to book into the hotels as they are only open to hotel residents. 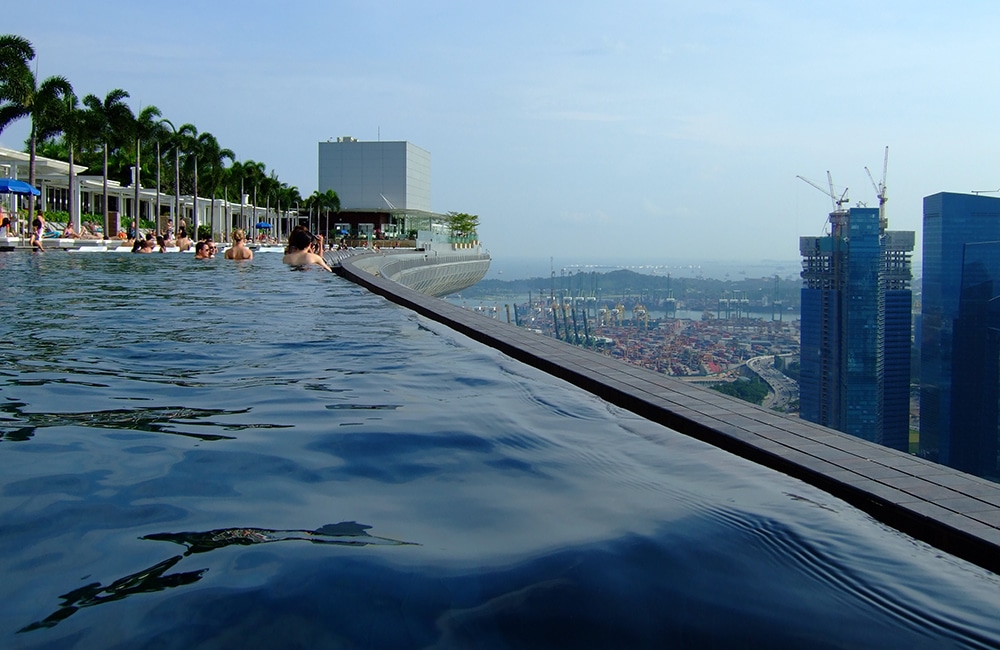 Who can forget getting thrashed about and almost drowning as a kid during summer holiday visits to a wave pool?

Well, the ultimate wave pool is located in Siam Park City Water Park near Bangkok in Thailand, which at 13,600 square metres holds the Guinness World Record for the world’s largest wave pool. The waterpark is also Asia’s largest.

Fancy swimming in the same pool as bygone Olympic heroes? There are a number of former Olympic Games pools still open to the public, including in Berlin, Munich, Barcelona and of course London.

However, the oldest Olympic pool, which is still accessible, is the Piscine de Torelles from the Paris Games in 1924. In the early years of the Olympics, the swimming events were often held in rivers or lakes but in 1924 competitors entered the Piscine de Torelles and for the first time were separated by lane markers! The pool was the venue for the diving, swimming, water polo, and the swimming leg of the modern pentathlon.

In 1989 it was renovated and renamed the Piscine Georges Vallerey, after a French competitor at the Paris Games. The pool is 50metres and in the summer the roof can be retracted to offer open aired swimming.