Even the most skilled Individual can sometimes injure themselves when taking part in their favourite sport – which is why being insured is so important.

Which sports are the most injury prone? 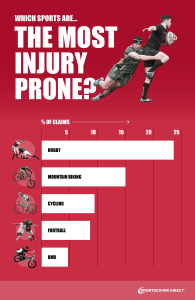 Certain sports will have more risks than others, but which are the most injury prone?

From analysing the number of injury claims per sport type, we can reveal that rugby players have the most accidents as 23.62% of injury claims are for this sport. This is no surprise as rugby doesn’t include pads or headgear, which increases the probability of an injury occurring given it’s a high contact sport.

Another injury-prone sport is mountain biking, as 15% of claims are for downhill or regular mountain biking. Reports have shown that mountain biking is on the rise, with the market expected to grow 10% between 2020 to 2027. Potential mountain bikers will need to be prepared as riding off-road over varying trails and surface conditions at high speeds can lead to serious injury.

Cycling is the third most likely sport for participants to be injured with nearly 1 in 10 claims being for a cycling injury. There are many reasons why a cyclist can unfortunately fall and have an accident, for instance, unlevel roads and slick surfaces.

Which sports have the biggest insurance claims? 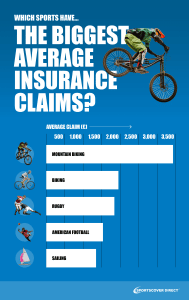 When taking part in sports, the participant should always evaluate the risk of becoming injured. However, even the most careful sportsperson can’t always avoid accidents. Being injured can cause many financial burdens, which can be helped by being insured. So you can take part in your favourite activity with peace of mind.

The sport which has the average largest claim is mountain biking, which totals £3,427. Mountain biking and downhill mountain biking has many variables that can lead to risks of injury such as the terrain, weather and faulty equipment.

General biking has an average claim of £1,951. Similarly to mountain biking, injuries can include broken bones and deep cuts. Some top claims include medical bills, loss of earnings and equipment replacement.

In third place is rugby, which has an average claim of £1,841. Rugby is a very physical sport, and players have only a mouthguard as protection! However, there are possible health benefits which include a reduced risk of type-2 diabetes and even depression. Despite these benefits, there are also many injury risks which can even leave rugby players out of work. 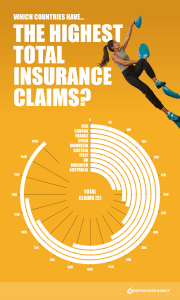 Sport travel is a fantastic way to explore the world and meet new people, whilst taking part in the sports you love most. When analysing the internal data for sports travel claims we can reveal the countries which have the highest total of claims for injuries.

Why is it important to have sports travel insurance?

We believe in the necessity of sports travel insurance, particularly in sports where the risk of injury is considerably higher so you can truly enjoy the sport you are taking part in.

Many standard holiday insurance policies  won’t cover sports, so without specific sports travel insurance you may also face huge medical bills if you become injured. Whether at home or abroad, make sure you are not vulnerable to the financial repercussions of the injury.

To uncover which sports were the most injury prone, we used internal SportsCover Direct claims data for the number of sports which had claimed for accidents and ranked these from the most accident claims to least.

The biggest claims were calculated by looking at the sum of claims for each sport and then dividing it by the number of claims the sport had received to work out the average sum per claim. The sports with the highest sums were revealed as the biggest claims. Sports with only one claim were removed from the data to avoid anomalies.

To reveal which countries have the highest total  of claims we looked at the sum of injury claims for sports travel insurance for each country.