Bradley Wiggins did it in 2011, Tony Martin did it in 2015, while last year it was Geraint Thomas’ turn. The connection between the three cyclists? Their Tour de France campaign that year was cut short by a broken collarbone.

While road rash, saddle sores and other minor injuries and ailments will have blighted many regular cyclists, it is these fractures and serious injuries that can lead to an extended period off the bike.

And like the pros that have suffered the same fate, it seems that fractured clavicles are the scourge of amateur cyclists as well.

According to SportsCover Direct’s latest figures, more claims were made by cyclists for broken collarbones than any other serious injury in the last three years. A total of 17% of cycling injury claims received since the start of 2015 saw individuals suffer the same fate of the three pros named above.

There was close competition for the most likely ailment to be suffered by bike-bound customers. Perhaps unsurprisingly, due to the likely nature of a cycling accident, shoulder injuries were the second most common injury.

Upper body injuries were far more common among the SportsCover Direct customers, making up 81% of those suffered whilst cycling. Coming down a hill too fast or clipping the back wheels of a fellow rider can often result in cyclists going over the handlebars and hitting the tarmac hard, their arms and upper body taking the brunt of the impact.

Back in 2014 Chris Froome’s Tour defence was ended prematurely when a crash left him with a broken hand and wrist. The latter injury was the third most common suffered by SportsCover Direct’s amateur cyclists – befalling 13% of people making a claim due to injury. 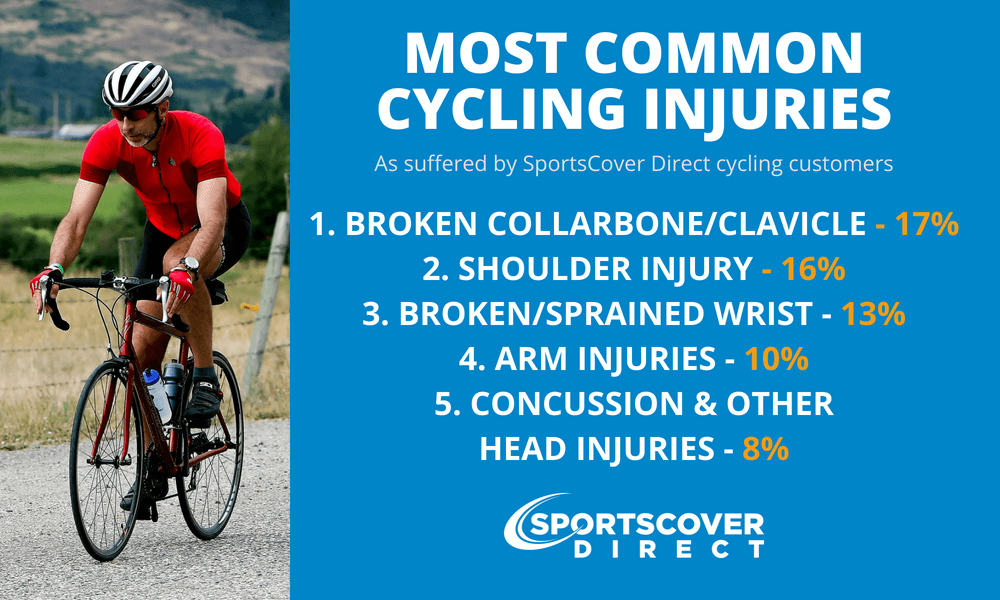 How to protect yourself

Of course, prevention is key when it comes to injuries. Taking care on your bike will obviously reduce the chance of a broken collarbone, or worse. Ride within your means, don’t over exert yourself or attempt that ambitious overtake in a race. Every cyclists wants to best themselves, but staying safe has to take priority. And by riding sensibly, your chances of coming off your bike are minimised.

However, it’s not always that simple. Unlike the pros, if you do crash, it’s unlikely that you will have a support team helping you out. Many of SportsCover Direct’s claims resulting from cycling injuries run in thousands of pounds if customers need emergency medical treatment abroad, or repatriation back home.

By taking out Sports Travel Insurance you ensure that if you were to sustain a broken collarbone, shoulder, wrist abroad you are covered for some of the costs you may face.