The island of Lanzarote is synonymous with kitesurfing and it’s easy to see why. Though the village of Caleta de Famara is pleasant-if-nondescript, the beach on which it stands is a haven for those looking to test their kiting mettle.

Tucked away in the north-west corner of the island, the sweeping sands are the go-to place for kitesurfers in Lanzarote. Picking up Atlantic swells throughout the year, conditions are almost always perfect for both beginners and the more experienced surfer.

A designated zone for kitesurfers means visitors are free to catch the waves without having to worry about disturbing other holiday makers. That being said, anyone looking for a relaxing afternoon on the beach has plenty of other smaller, quieter stretches of sand to frequent on the island.

First-timers to Famara, or to kitesurfing in general, are advised to check in with one of the many kitesurfing schools that line the main road through the village to get a great introduction to the sport and to the special location. Beginner’s courses can usually be booked for around €100 and are well-worth taking advantage of.

In fact, Lanzarote was named as the second-best value for money destination of 2018 in Lonely Planet’s most recent awards, making a trip to the Canary Island something that should be investigate sooner rather than later.

Spend a few Euros on a handful of kitesurfing lessons in Famara and you are treated, not only with ideal conditions, but also a dramatic setting in which to catch some waves. 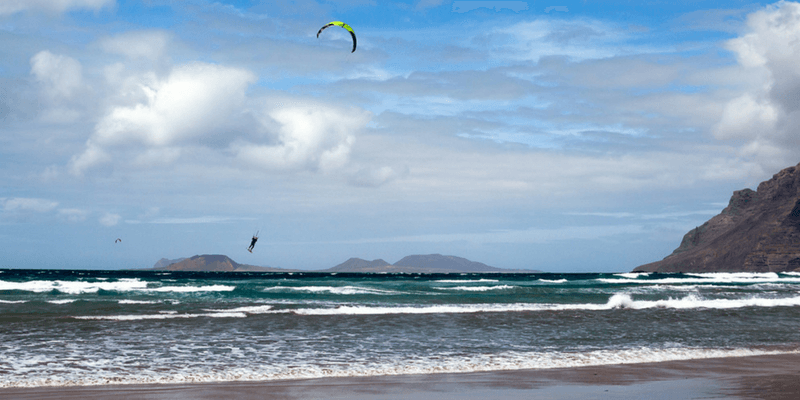 Imposing limestone cliffs line the edge of the beach, forming a natural arena around this kitesurfing haven. The rocks curve around the bay offering additional leisure and sporting options for those not content on spending their time on the water.

A number of hiking trails follow the coastline, giving walkers a bird’s-eye-view on both those getting their adrenaline kick in the breakers below and the nearby Isla Graciosa, less than 10 miles across the water.

The cliffs, some reaching over 400m high, are also a perfect spot for those seeking a real extreme sporting experience. Paragliders and hangliders are a common sight in the skies above Famara. Some companies will provide relaxed flights taking in the surrounding scenery, others might throw in a spiral or too to keep you alert! Whichever type of flight visitors choose, they are in for a treat with spectacular views over the volcanic island. 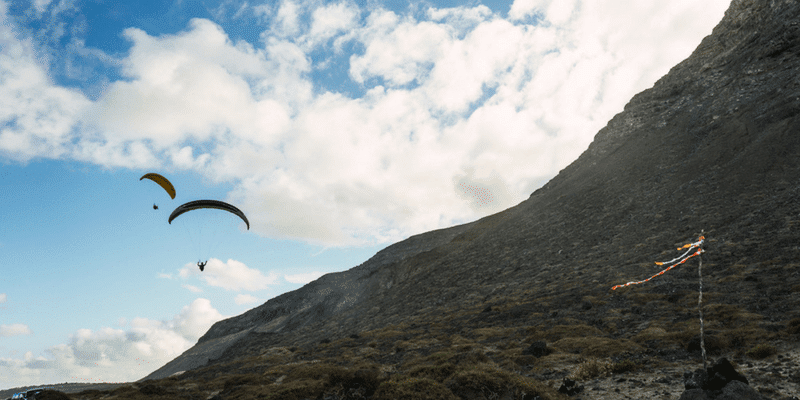 The sporting options don’t end there though. Back on the ground, Lanzarote is developing itself as an up-and-coming mountain biking hot-spot. The aforementioned volcanic landscape means there is no shortage of testing runs down rocky hillsides.

Penas del Chache, in the south east of the island, marks the highest point on the island, rising up to just over 1000m above sea level welcomes cyclists bold enough to tackle the climb before launching themselves back down the crater’s edge.

For those wanting to stay on the roads, the 10km Tabayesco climb is one to investigate. The climb up to the summit of Mirador de Haria is generally a steady one with inclines of around 5% most of the way, though when the winds blow it can feel like a never ending challenge before you reach the final hairpin.

But for anyone whose visit to Lanzarote is simply for kitesurfing there are other options aside from Famara, including a number of kite schools in the popular tourist resort of Costa Teguise.

If Lanzarote is on your shortlist for your next action-packed holiday, there’s no reason to wait until next summer. The average temperature stays above 20 degrees year-round, and leave it later in the year and you might even have better conditions to truly appreciate it’s value as a top kitesurfing destination.

But when you do head to the Canary Islands, make sure you have complete kitesurfing insurance for all your fun on the water.