In my last blog I introduced readers to my latest challenge – cycling up the infamous Mont Ventoux three times in one day to raise funds for The Air Ambulance Service.

You will have probably heard of Ventoux, as it often features on the Tour de France and last year whilst climbing the mountain, Chris Froome was knocked from his bike and had to run until a spare bike was driven up to him! Luckily I didn’t have to run up any part of the mountain, although I did spot two people trying to conquer the mountain on two feet rather than two wheels!

Mont Ventoux, which stands at a height of 1912 meters lies in Provence and translates as ‘The Windy Mountain’. So strong were the winds on the day of last year’s Tour de France stage that the summit had to be closed and the finish line was moved lower down the mountain, where the winds were less dangerous!

On the day it wasn’t just the wind and the steep gradient that I had to battle against, as the temperature reached over 35 degrees Celsius. However, I am pleased to say that I survived the challenge and rode the three paved roads from Malaucène (21km, ave 7.5%), Bédoin (21.5km, average 7.5% gradient), and Sault (26km, ave 4.7%), covering 138kms and 4400m of climbing in total. 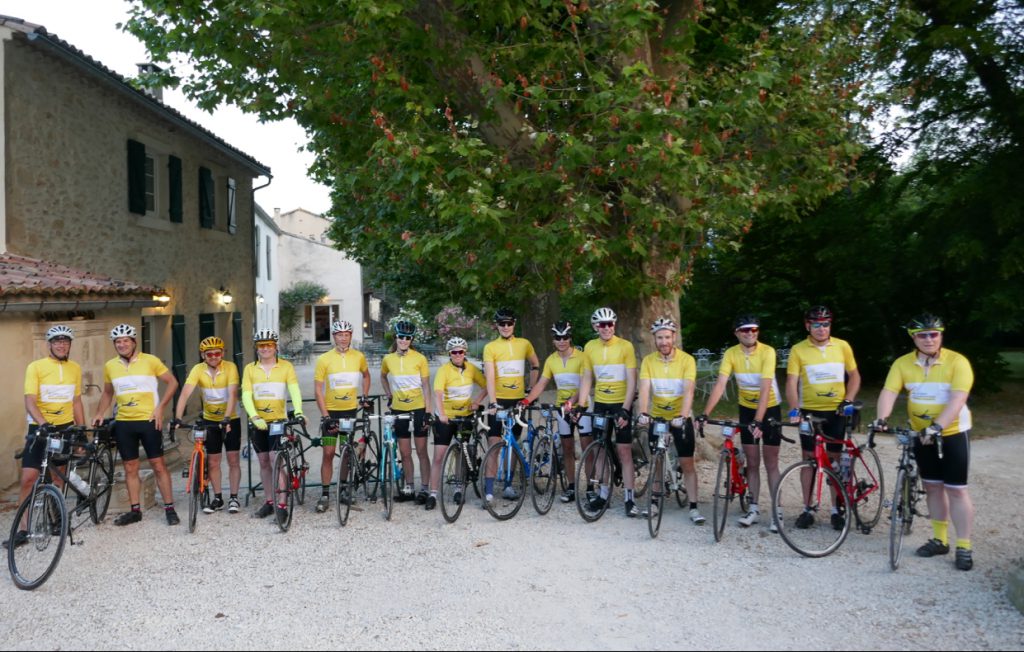 I was part of a 15 strong team, who were all riding to raise funds for The Air Ambulance Service and The Children’s Air Ambulance. In order to try and avoid some of the heat that was sure to arrive later in the day, we had an alarm call at 5.15am, grabbed a quick croissant and cereals and mounted our bikes at 6am. As our hotel was in Malaucène this was our first ascent. In fact, our hotel was at the base of the mountain road and so we didn’t even get a warm-up, hitting a high gradient immediately, which my quads didn’t appreciate!

We soon reached the switch-backs that zig-zag up the mountain and were treated to amazing views over the region. After a few kilometres, I noticed that my gears weren’t changing smoothly into the lowest gears and knew I needed to get this sorted if I was going to be able to ride the severest of gradients. Luckily it wasn’t too long until I spotted one of our support vehicles and one of the support crew from 445 Cycling Tours gave my limit screw a quarter turn to slightly move the derailleur, which sorted the problem and I was back on my way, relieved that I would have a full range of gears!

After fifteen kilometres of climbing I emerged from the tree lined roads, which had provided some cover from the sun and got my first view of the iconic weather station at the summit, standing above the almost-white limestone, lunar landscape, which was reflecting the sun and heat. After just over two hours of riding I reached the top for the first time – now I just had two more climbs to complete! As it was still only just after 8am, the summit was still quiet and we could pose for photos and fill up on supplies from the support crew, before descending down into the village of Bédoin. 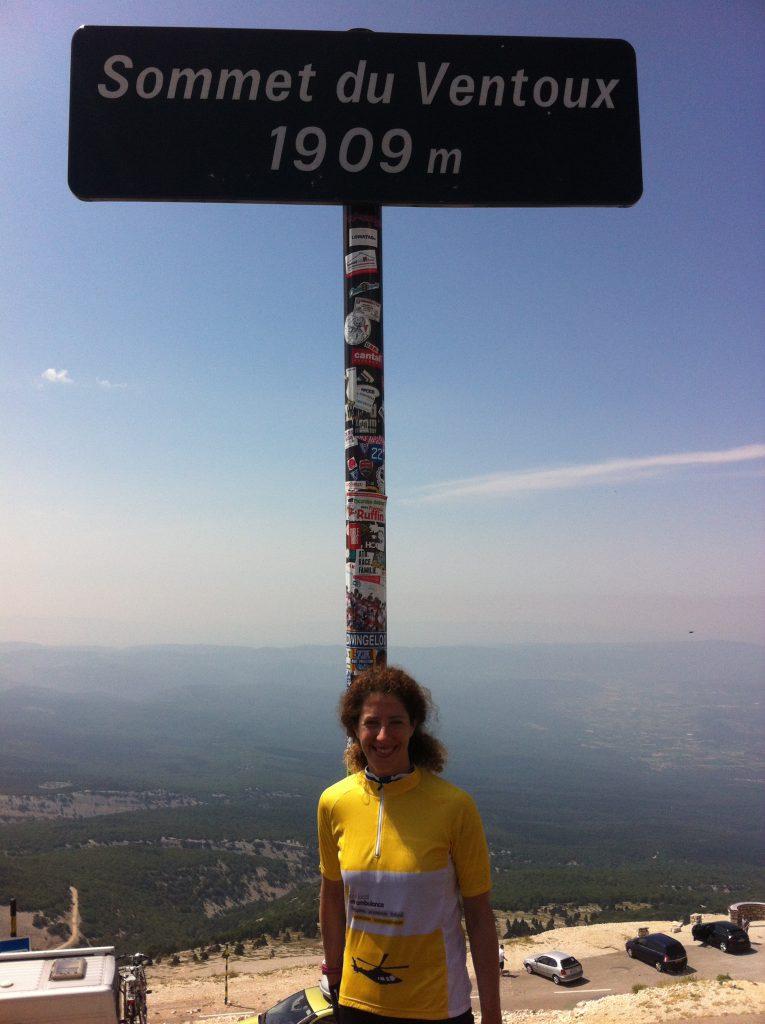 As I started the descent I spotted the memorial to British cyclist, Tommy Simpson, who died on the mountain during the 1967 edition of the Tour de France, just 750 meters from the finish. This year is a special year for the mountain as it is the 50th anniversary of his death and I stopped for a few minutes to pay my respects, before re-starting the descent towards Bédoin.

The second climb from Bédoin is the hardest and is the route that usually features on the Tour de France. Unlike the climb up from Malaucène, the gradient was unforgiving all the way, with no flat sections.

By this time it was starting to get very hot and it seemed that my head was throbbing in time with each revolution of the pedals. I realised I needed to drink more and focused on regularly sipping my drinks and taking energy gels and salt sticks to avoid getting too dehydrated or even heat stroke. As this is the most famous climb, there were lots of riders attempting to follow in the footsteps of their cycling heroes and reach the summit. At one point I wondered why one came zooming past me, until I realised they were on an electric bike – cheats! It was great to see so many people of different abilities, all trying to achieve their personal goals.

This was definitely the hardest climb of the day and I was relieved to spot the summit with 6km to go. I always find the final 5km physiologically easier as I can commence the final count-down of the kilometre markers on the side of the road, that show how far there is left to ride. Again, the climb took just over two hours and as it was now approaching midday, the heat, as well as lots of tourists, had arrived at the top. 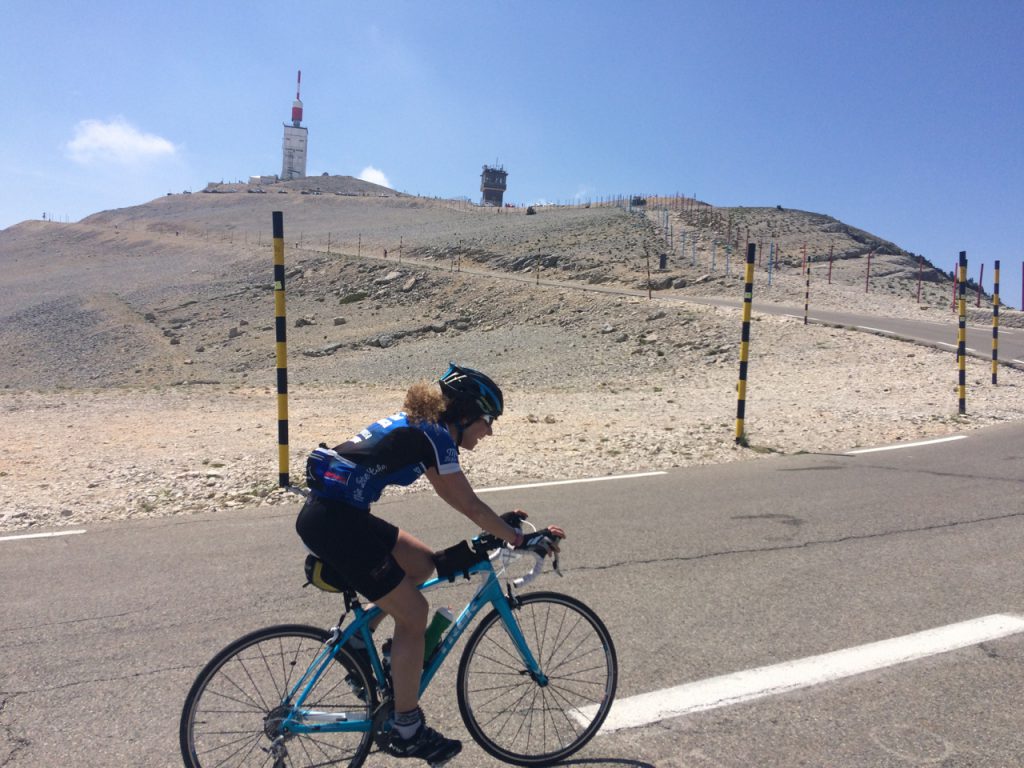 It was a relief to start the second descent, this time into Salut. I knew that the final climb was the easiest, which gave me a mental boost. As long as I was sensible and didn’t get cramp, I believed I could complete the challenge. The descent into Salut was my favourite – the road was sweeping rather than perilously steep and half way down, the road reached the beautiful, purple provencial lavender fields, which I smelt before seeing!

After a quick ice-cream in Salut to cool down, I commenced the final climb of the day. By this time I could feel the threat of cramp in my calves and so took some more salt sticks – I didn’t want to fail so close to the end! Although the longest climb, the lower gradient means that this is supposedly the easiest, although of course that doesn’t account for having already ridden two other ascents!

I took it easy and tried to enjoy as much of the scenery as I could, as I knew this was a ride that I was unlikely to ever repeat! Finally, the weather station came into view with 6km to go and again the count-down to the summit started. Nearing the final kilometre, I heard cheers from one of the 445 support crew, giving me a final mental push to the top, which I finally reached, elated but exhausted.

It felt as if I had finished the challenge but of course I hadn’t, as I had the final descent back into Malaucène. As I was fatigued, I would really need to focus on my descending skills, to avoid going over the sheer drop in the first few kilometres! I bought a few souvenirs from the summit shop, put them in my jersey back pockets and started to roll down. The descent in the first few kilometres was steep and so I concentrated hard, especially on the corners. I had expected the descent to provide some relief from the energy sapping temperature but it felt as if the heat kept slapping me in the face, as the temperature increased with every kilometre closer to sea level! 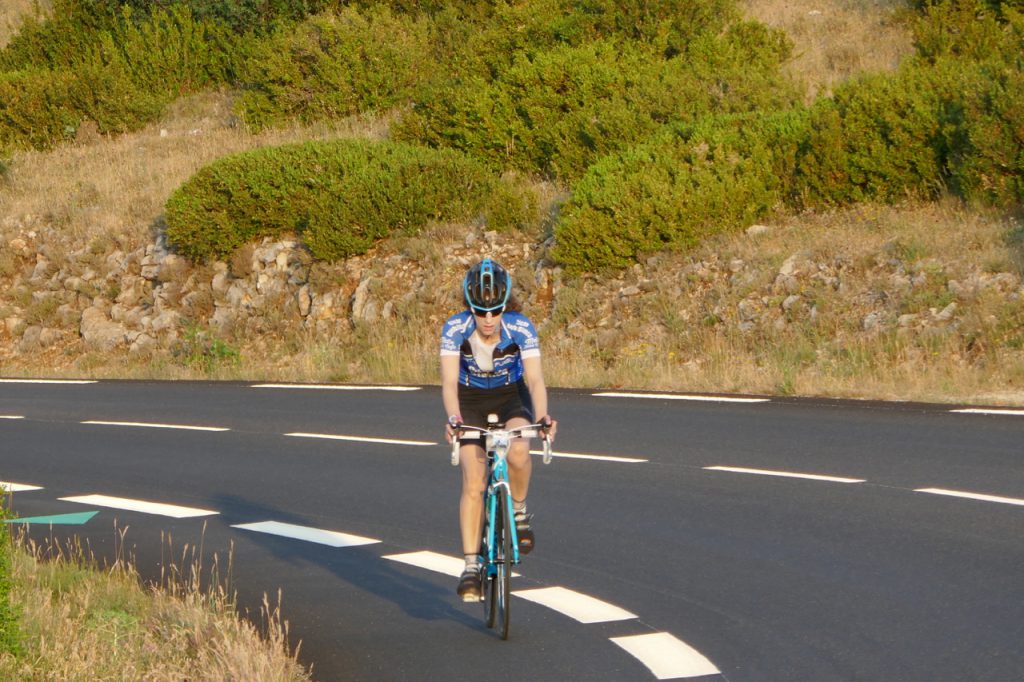 The flatter sections that had provided some respite on the way up now punished us, making it impossible to free-wheel all the way down. However, I knew that with each pedal stroke, I was closer to the finish and sure enough after about 45 minutes I spotted our hotel, rode through the gates, dismounted the bike and plunged my legs straight into the hotel pool to cool down!

It was an amazing feeling to have completed the challenge, one that was so tough that four of the team were unfortunately unable to ride all three climbs. My personal happiness was tinged with sadness, that for various reasons, they couldn’t complete the ride. As a reward for my efforts, I will now be welcomed into the prestigious Club des Cinglés du Mont-Ventoux and be one of the ‘Mad Men of Ventoux’, a title which recognises everyone that rides the three ascents in one day, and one which less than a hundred English women have received.

Of course the challenge is not just about the cycling but the fundraising. I chose to join the challenge organised by The Air Ambulance Service as the charity receives no public funding and relies on donations. As a sportswoman and cyclist I know many people whose lives have been saved by the Air Ambulance, including members of my cycling club and so wanted to say thanks in my own way. I have set a target of £2000 and am about £500 short of this, so if you would like to help me achieve my target I have a Just Giving page where donations can be made: https://www.justgiving.com/fundraising/HelenRussell-MontVentoux

Helen is the current British Quadrathlon Champion and former age group World and European Duathlon champion and European Triathlon champion. In 2015 Helen was part of the One Day Ahead team, which raised £1m for Cure Leukaemia by riding the entire route of the Tour de France one day ahead of the pros. You can follow her on Twitter via @helengoth.