For many in the UK, American football might seem like a sport destined to fully transfer over the Atlantic. For others though, a variant of the sport is a big deal.

Flag football is much like the more widely-know variant of the game, except that instead of shoulder pads and hard-hits, to stop a ball-carrying opponent you simply have to ‘deflag’ them.

SportsCover Direct insure many of the UK’s flag footballers, and the increase in numbers taking out policies hints at the growth of the sport on these shores.

One man that knows all about it is Great Britain and Glasgow Hornets wide-receiver and SportsCover Direct customer Julian Holburn-White.

He told us just what is needed to succeed in the world of flag football.

“It’s a real team sport in terms of dynamics and behavior. What you do individually directly affects the consequences of the play,” he said.

“Like most team sports there are plays designed to beat the offence or defence. In flag, each receiver has a particular route to run which engages your defender even though the focus is on one of the three. By completing your route properly it makes an opening for someone else. Much like in defence, communication is key.” 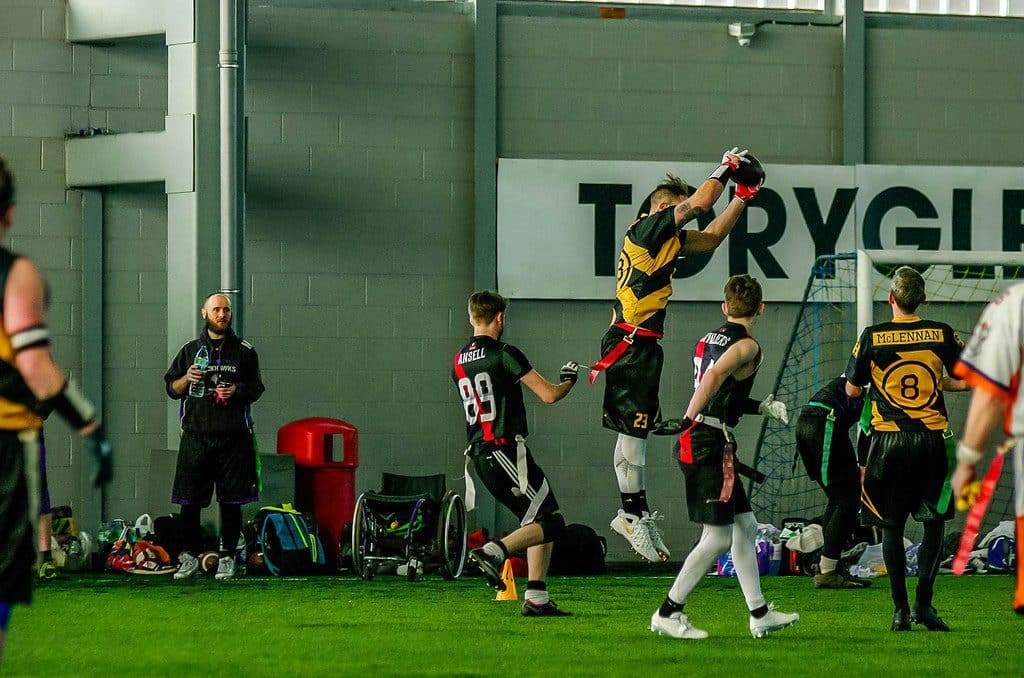 For Julian, it wasn’t a life-long desire to replicate those donning the jerseys of the Patriots or the Broncos. Coming from a basketball background, his introduction to the sport stemmed from a simple visit to a local park with some friends:

“Four years ago a team-mate who followed the NFL invited me to a mess around in the park with his mates where it was a simple tap on the waist for a tackle, much like touch rugby. I really enjoyed it and a few months later one of the guys contacted me to say he was entering a team into a flag football league. He’d noticed I took to it quite well so invited me along to a training session.”

“Straight away I enjoyed it and found it quite transferable from basketball skill-wise. Before I knew it I was kitted up and playing my first game three months later.”

From then on it’s been a path to success for the Scot. Having joined the Hornets at the start of the 2016, Julian was part of the side that topped the Scottish Conference before being pipped in the BritBowl (think British flag Superbowl) by just a solitary point .

Two weeks later and he was on the plane to the World Championships in Miami with the Great Britain squad. That was something that Julian rates highly in his career.

“Representing GB was an honour unmatched by anything I have been involved in. It has given me memories I will never forget. The initial selection followed by training with the best in the country and lining up against countries like Canada, Denmark and Mexico who are known as the best in the world, gives you goosebumps.

“Not to forget USA who are naturally the creators and masters of it. They are a different breed at this sport although Denmark were only beaten by one point when they met in the World Championship final. I still get a buzz thinking about pulling up to the playing fields and seeing all these countries warming up.” 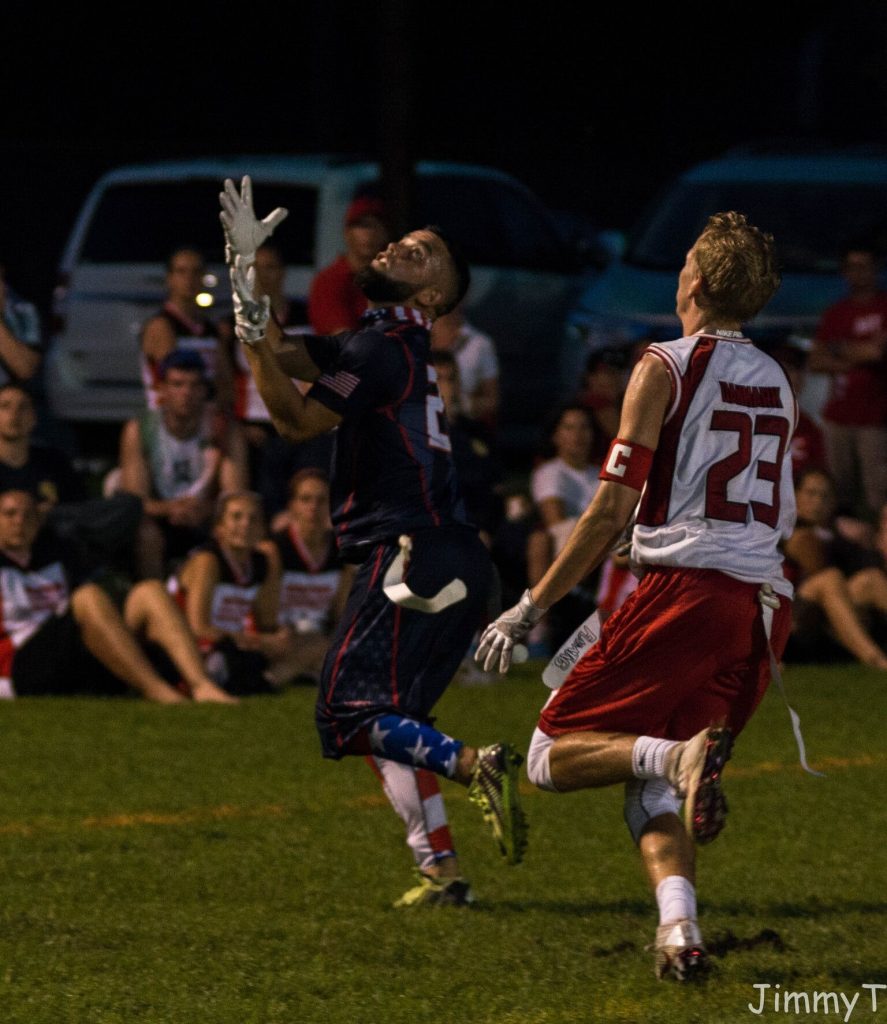 A bright future for the sport

The GB team that travelled across the pond competed valiantly and finished the tournament in a very respectable ninth place. That good showing on the world stage is just one of the things that Julian believes shows that flag football is growing in the UK.

There’s also the benefit of a number of the world’s best in the full-contact version of the sport heading to Wembley for the past few years.

“The NFL is making the sport more popular and that’s increasing each time games are held in London,” said Julian.
“Flag gives people of all ages the chance to play American football without the huge hits and injuries as well as the expense of equipment.

“It would be great to get to a point where the teams become more competitive. At this point there are still lots of new people and teams in the sport that although they know the game from watching NFL games they do not quite have the mechanics of running good routes or pulling a flag.

“There is talk of potential Olympic recognition for the sport too. Although I don’t imagine it will be anytime soon, it would be awesome to see it there.” 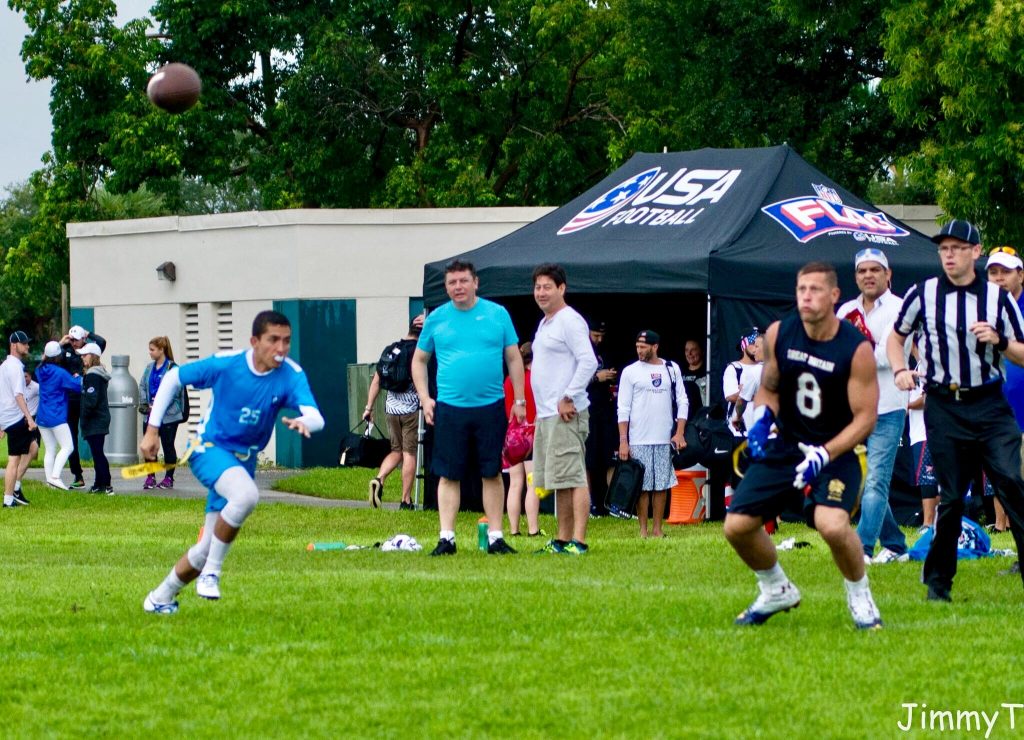 For Julian on an individual level, plans and aims for the months ahead are clear.

“2016 was a huge year in terms of football…much to my wife’s disgust! My transfer to Glasgow gave me the opportunity of progressing my skill level and sampling being a Conference winner.

“I also experience BigBowl which is currently the largest European tournament held in Waldorf, Germany, playing for the Scottish Chieftains. The tournament brings together a mass of international and club teams participating over two days. It’s an awesome experience.”

“On top of that was the World Championships in Miami which was the year’s highlight of highlights.”

“Selection for GB is my number one target, though I’d love to go one better and win BigBowl this time. It should be another great year for me and football…although I may need to treat my wife to something as a sweetener!” 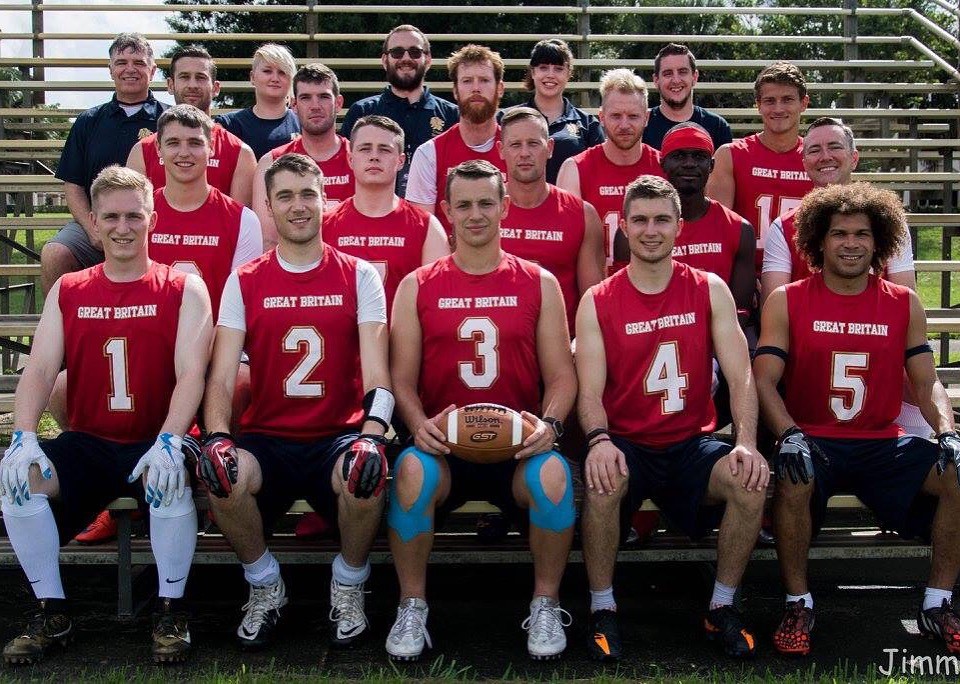 If you’d like to get involved in flag football, there are teams up and down the country with websites. A quick web search should point you in the right direction. Otherwise, head to the British American Football (BAFA) website for a full list of the registered teams.

Before taking to the field, ensure you are fully covered for all eventualities, click here to get a quote now.