Every year the final stage of Le Tour is in Paris which is often the easiest and quickest place for Brits to reach. Eurostar from London to Paris takes just over 2 hours, which means that for many it is feasible to get to the race and back in a single day. Plus, as it always takes place on a Sunday, you can make a weekend of it and may not even have to take a day off work!

Once it enters the capital the race is laps, which means that you can see the peloton more than once. However, whilst the final sprint of the Tour is exciting, the actual general classification, that is the overall race result, is already decided the day before, so there isn’t the suspense of whether the lead will change during the stage.

This year the final stage of the men’s tour coincides with the first of the Tour de France Femmes, an eight stage race in the north east of the country, culminating in a summit finish at La Planche des Belles Filles in the Vosges Mountains. So this year you get to watch two races for the price of one! 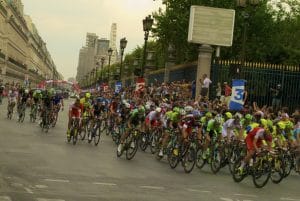 Closest place to the UK

This year is an ideal one for Brits to see Le Tour, as there are some stages just across the channel. The closest to the UK is stage 5, which runs on July 5th from Dunkirk to Calais.

The actual route hasn’t been released yet but the race organisers usually choose a scenic route and also often like to add the excitement of cross winds, so it is likely that the route into Calais will be along the coast. There are plenty of hotels and campsites in Calais, making it a really easy option to watch the race.

There are also two further stages close by – Stage 6 from Lille to Arenburg and Stage 7 from Binche to Longwy. There are bound to be lots of British spectators at each of these stages.

The actual route will be published closer to the time in the ‘Official Roadbook’, which gets issued to the race teams and is available on the Velorooms website. Not only does it show the route but also really useful information such as road closures, race timings and even the hotels the teams will be staying in! 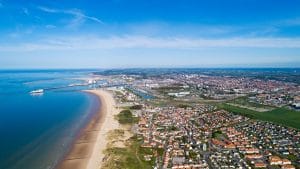 If you want to see a particular cyclist there is no point going to see part of a long flat stage, as it’s more than likely that most of the riders will be all together in the peloton and will just flash past you in a matter of seconds.

Instead, a great way to see your favourite rider is to go to a stage start. All the teams and riders have to ‘sign-in’, which is literally checking into the day’s race and they do this on stage. Fans can even sometimes get an autograph or a selfie but you will need to get to the venue really early, as people will start to assemble in front of the stage hours in advance! Be sure to take some water with you.

You could also find out from the Official Roadbook what hotels the teams are staying in and see them setting off for the stage in the morning. Even better, find out what hotel they are staying in during the two rest days and you might spot them having an easy spin in the area. Of course, if you do this then please be respectful of the riders and give them plenty of space. 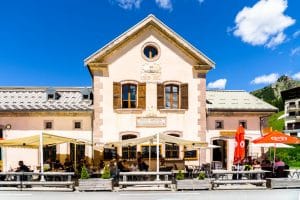 Often when watching Le Tour, you will spend hours waiting and then the riders pass in seconds. However, one way to see the riders for hours on end is to watch a time trial stage.

On these stages the riders race either individually or in their teams against the clock and set off in one or two minute intervals, which means you are guaranteed to see a rider at regular intervals. This year, the time trial will be particularly exciting as it’s the penultimate day of the tour, so it will, more than likely, be the stage that decides the overall winner.

The route is 40km and runs from Lacapelle to Marival Rocamadour in the Midi Pyrenees. On days where I have watched a time trial, I have positioned myself within walking distance of a café or restaurant and even enjoyed an alfresco lunch whilst watching! 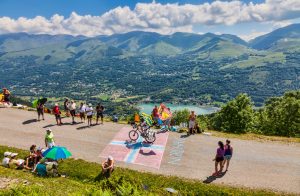 Without a doubt the noisiest and liveliest place to watch Le Tour is on the iconic Alp d’Huez and this year will be especially lively, as the stage will finish on the mount summit on 14th July, Bastille Day. If you want to watch from the mountain, then you will need to get there well in advance – and I’m talking days not hours in advance!

People will camp out on the mountain side for days before the arrival of the peloton in order to soak up the legendary party atmosphere. There are even designated corners on the 21 switchbacks, hosted by particular nationalities. The liveliest is ‘’Dutch Corner’ on the 7th bend which is dubbed the biggest party in cycling.

However, the Brits have in recent years built a big following at the ‘Beefeaters Bend’ on bend number 10! Alp d’Huez is not for the faint hearted, or for anyone wanting to sleep during the week of Le Tour! 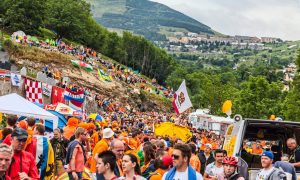 Get around by bike.

Road closures and the large numbers of spectators can make getting around at the Tour really difficult. The best way to get to any part of the route is by bike.

The basic route gets announced in October and accommodation sells out really quickly. Going by motorhome is really popular and gives you more freedom.

An hour before the riders arrive the ‘Caravan’ passes through. This is basically a carnival procession of companies advertising their products and throwing samples out into the crowd. If you pick a good spot you can make away with lots of swag.

Watch by a feed station.

The best place to catch a flying bidon (drinks bottle) is near to a feed station. The location of feeds stations will be shown in the Official Roadbook and are a great place to watch the skills of the riders picking up their musettes of food, as well as giving you a chance to catch a much sought after team bidon!

Ride with the pros.

Some stages finish at the top of a mountain and due to the limited amount of space at the summit the pros have to cycle back down to reach their team bus. Once the main groups of riders have passed the Gendarme will usually let people ride down the mountain as well. This could be your only opportunity to say that you’ve ridden with some pros!

For those who intent on taking in a spot of riding themselves, remember that if the pros can have accidents, so can everyone. SportsCover Direct Cycling Travel Insurance policy will protect not only your usual travel insurance needs such as lost baggage and cancellation, but you’ll also benefit from cover if you were to have a spill from your bike and require medical attention.

Get your cover from SportsCover Direct to give you peace of mind, so you can concentrate on experiencing Le Tour!