The 107th Tour de France is due to start in under a month’s time. Due to the coronavirus pandemic, the tour has been pushed back from July to the end of the summer. On 29th August, the race will commence from Nice Moyens and 23 days later arrive on the Champs-Élysées. 22 different teams (176 riders) will be battling for the different jerseys, stage wins and the top step in Paris. 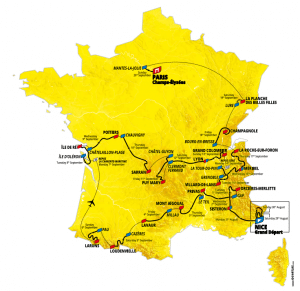 The president of the Union Cycliste Internationale (UCI), David Lappartient, recently said that every race has a risk of being cancelled due to possible spikes of COVID-19 cases and changes in national regulations. The Tour de France is one of the most viewed outdoor sporting events each year, so there is a possibility that the Tour may have to be cancelled mid-way through if cases increase from the spectators. Let us hope that this is not the case so we can all watch the rider’s race across the stunning scenery that France has to offer.

These riders are taken from the provisional start-sheet so some may not be starting. 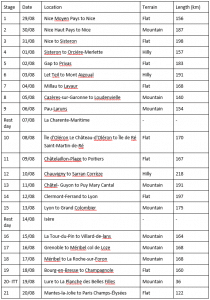 This is certainly a stage where the GC race could be lost for some of the riders. The riders will be going over 3 cols, 2 of which go over 1500m and the total climbing is 4000m. Last year’s La Vuelta España saw INEOS’s Wout Poels and Tao Geogen Hart lose 10 minutes putting their GC hopes out the window very early on, during a similar stage, also on stage 2. For some riders, the same may happen this year. 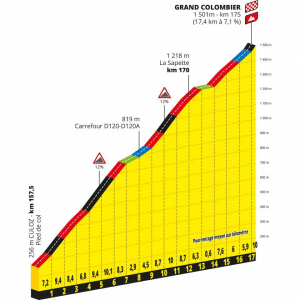 The final stage before the final rest day sees the riders cover 175km in the Jura Mountains and they ride the start of the final climb twice in the stage. The last ascent goes all the way to the top of the Grand Colombier. A gruelling finish to the stage will see the GC riders battle it out and they will no doubt leave everything out on the road before the final rest day. It will be the first time they have used this finish, but it was ridden in stage 10 of the 2012 edition, the stage won by Thomas Voeckler. 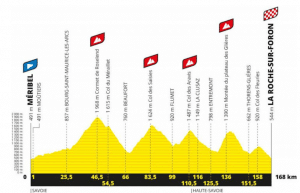 This stage is the final mountain day of the race. It covers 160km in the Alps. The riders will pass over 4 long climbs and then go over the Col des Fleuries which is a relatively short climb at 5km long and then descend over it to the finish. For the GC riders, there may be big splits before or on this hill which will certainly prove who has the best legs. However, going too deep in this stage could see riders losing lots of time in the next stage, the Individual Time-Trial. 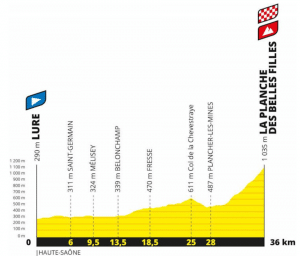 The penultimate stage of the race is an individual time-trial finishing up the La Planche Des Belles Filles. The first 28km are relatively rolling and flat compared to the last 8km so some of the riders may choose to switch bikes from a time-trial bike to a standard road bike just before the final climb. The yellow jersey holder after this stage should take the jersey home as the yellow jersey is not contested on the final stage. The sprinters are left to battle it out one more time to earn that stage win on the Champs-Élysées. Notably, the best stage to win in the whole race.