Each winter I look forward to escaping the cold British weather to triathlon train in the Costa Blanca in Spain. I first cycled in the Costa Blanca back in March 2010 and enjoyed it so much that I have returned each winter. This year I took advantage of my work’s office closure over the Christmas period and booked a stay of two-and-a-half weeks.

As a triathlete it’s important that I stay somewhere where, as well as cycling, I can also swim and run. For the last few years I have stayed at the Terralta Aparthotel in Benidorm. Having seen the sitcom ‘Benidorm’ I wasn’t sure what staying in the resort would be like but it is actually a great destination for triathletes due to the sports facilities in the town and its ideal cycling location on the edge of the Marina Mountains. Benidorm has a running track and nice coastal and off-road runs and there is also a public 25m swimming pool, plus the sea temperature is warm enough for some open-water swim practise. 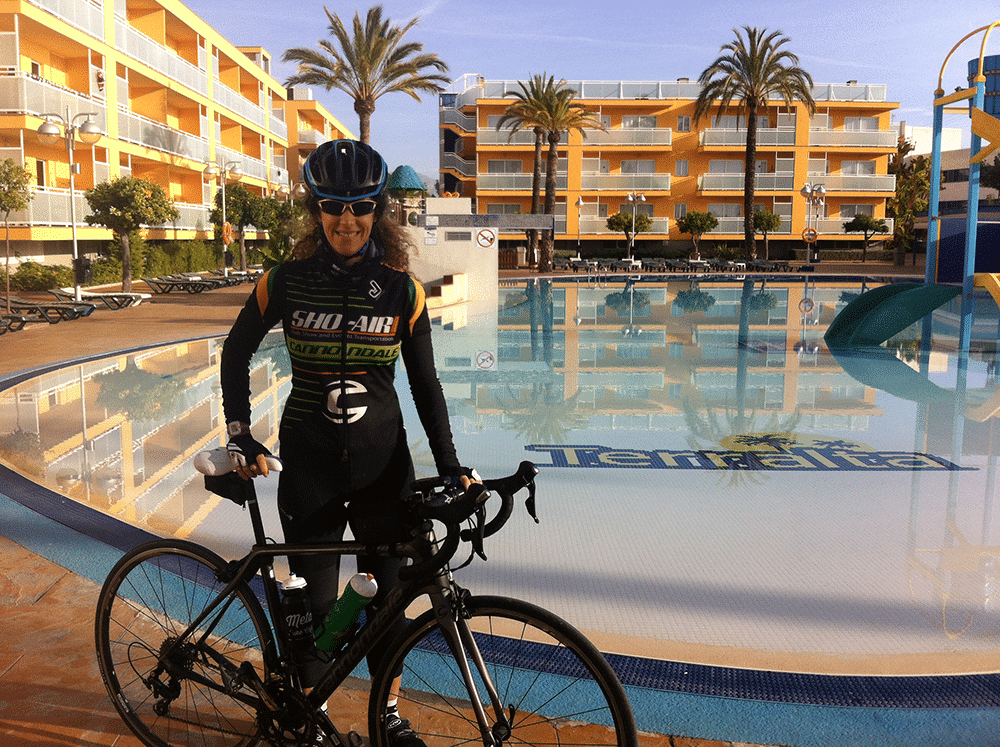 I started my training holiday with an interval run session along the Poniente Beach in Benidorm, before collecting my hire bike from Ciclo Costa Blanca. During my stay I would be riding a Ridley Fenix Carbon 2017 Ultegra Compact, which offers the perfect mix of speed and comfort. On my first day of riding I wanted a relatively easy route to warm up my legs and so I headed off from Benidorm to the chocolate manufacturing town of Villajoyosa where the air smells of cocoa! I then turned inland to cross the Amadori reservoir and ascended the climb to the village of Relleu for a stop at a café before the fast descent back down to sea level. This is a perfect warm up ride of 50 miles with 1164m of ascent.

One of the best things about riding in the Costa Blanca is seeing the pro-teams that use it as a base for their winter training and on my second day of riding I almost lost count of the amount of teams I spotted! I headed out to Parcent at the base of the infamous Vuelta climb of the Col de Rates and whilst enjoying a hot chocolate in a café the entire BMC youth team came in for their break! I had a quick chat with them and then headed up the Col.

As I neared the summit some members of AG2R Mondiale were starting their descent and as I reached the top I was able to talk to some riders who were having a quick refuel before they joined their team mates on the ride down. Then whilst riding from the Col summit towards Tarbena I was overtaken by the Giant Alpecin team and again managed to have a chat with them as they refuelled in Tarbena. All of the teams were really friendly and more than happy to have a chat and pose for photos. This contact with so many teams really made it a magical day of cycling!

To maintain my triathlon fitness, for me a training holiday has to include swimming and running and on my fourth day I met up with respected swim coach Martin Hill, who lives in the region, to have a video swim analysis and some technique coaching. It was fascinating to observe my swimming on film and see what I am doing as opposed to what I think I am doing! Martin gave me advice on how to improve my swim stroke and some drills to try before we met later in the holiday. Over the next couple of days the weather turned unusually stormy so it was the ideal opportunity put into practise Martin’s advice whilst it was still fresh in my mind and so I did a couple of swim sessions at the municipal pool in Benidorm as well as some runs.

Once the storms had passed it was time to get back out on the bike. The Vuelta often passes through the Costa Blanca and it is good fun to ride some of the climbs that feature and to read names of various cycling stars painted on the roads. In 2015 the penultimate stage of the Vuelta finished at the top of the Cumbre del Sol, just north of the coastal town of Moraira and I had heard that it would also feature in the 2017 race. I therefore decided to give the climb a try and rode along the picturesque coastal road to Calpe and Moraira before heading inland to climb the short but very steep summit.

Although only a 4km climb it reaches a gradient of 18.5% in parts, so I was very pleased to have been given the Ridley with compact gearing, as it made the climb a bit easier! Those that make the top are rewarded with beautiful views of the coast stretching from Albir to Denia and beyond. At the summit there is a sign marking the fact that it was a summit finish in the 2015 Vuelta, with a picture of a victorious Tom Dumoulin who took the stage victory. Cycling through Calpe on the way back to Benidorm I noticed some team vans in a car park, including those of Katusha Alpecin and An Post Chain Reaction and although the riders were still out on the road or resting in their hotel I was able to have a chat with some of the support staff.

One of the rides that I do each year is to climb through the lemon and orange groves to the hill fort of Guadalest. The route through the valley is green and luscious due to the River Guadalest and as you ride the 6km climb there are spectacular views below to the Guadalest Reservoir and towards the coast. The road continues to wind upwards beyond Guadalest village to Confrides and the summit of the Port D’Ares at 966 meters. It is possible to do a circular route back to Albir and Benidorm via the infamous Port de Tudons but I wanted to save that for another day so I headed back home! 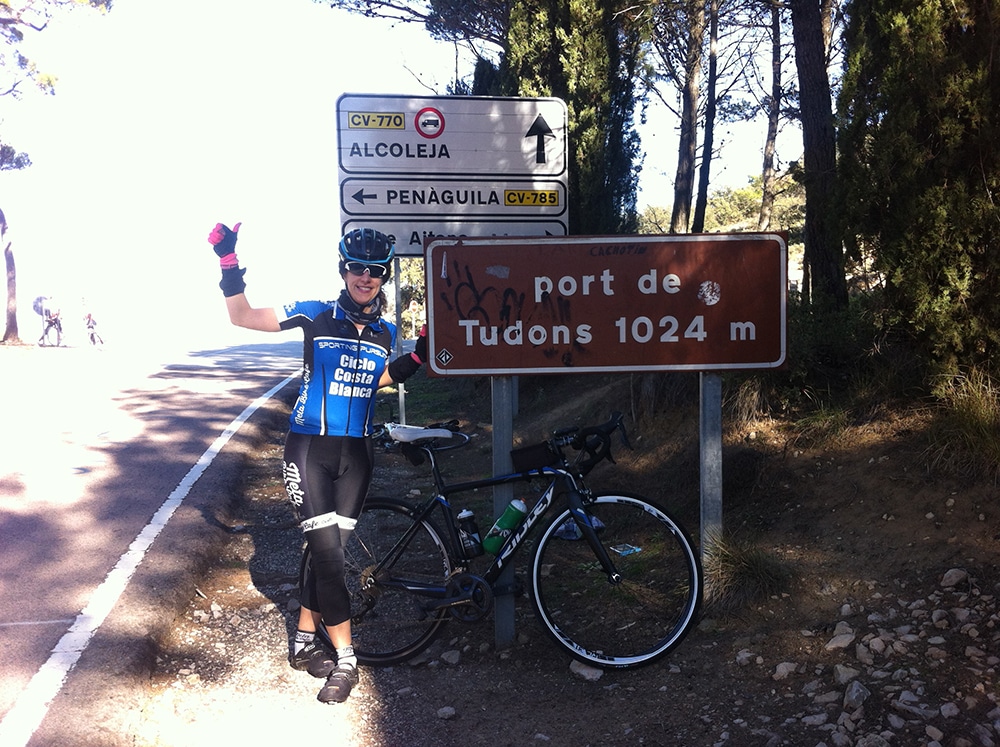 As well as cycling my favourite routes I always try to discover some new roads and climbs and this year I headed a bit further south to meet a friend and try the Puerto Tibi por Montnegre from the Mutxamel side. This 15km climb, reaching 728 meters isn’t very well-known but is a good challenge. Although the average gradient is only 3.55%, a sign at the bottom showing the profile of the climb warns riders that there is a 323 meter section at 16.5% and 215 meters at 12.2% and the climb peaks out at 21%! Due to the gradient and gravelly surface in some parts this is possibly the hardest climb that I have done in the region.

From one of the lesser known climbs to possibly the most well-known: the Port de Tudons. I always try to ride this climb as at 1024 meters, it is the highest summit in the area. The 15km climb from the village of Sella is a Category One climb with an average gradient of 5% and is a regular feature of the Veulta. The penultimate stage of the 2016 race climbed the Tudons twice and finished at the military base at Aitana, which unfortunately is closed to the public. It was great fun to read the names of the pro-riders painted on the road, which increased in number the closer to the summit! It is possible to do a circular route that takes in the Tudons but as I wanted to swim in the afternoon I just headed back down to sea level.

Christmas morning arrived and I started my celebrations by donning my wetsuit for a festive sea swim, followed by chocolates and Cava on the Benidorm’s Poniente Beach! The water was warm enough for a 30 minute swim and over the next few days I enjoyed a further two swims in Benidorm and further down the coast in Villajoyosa. 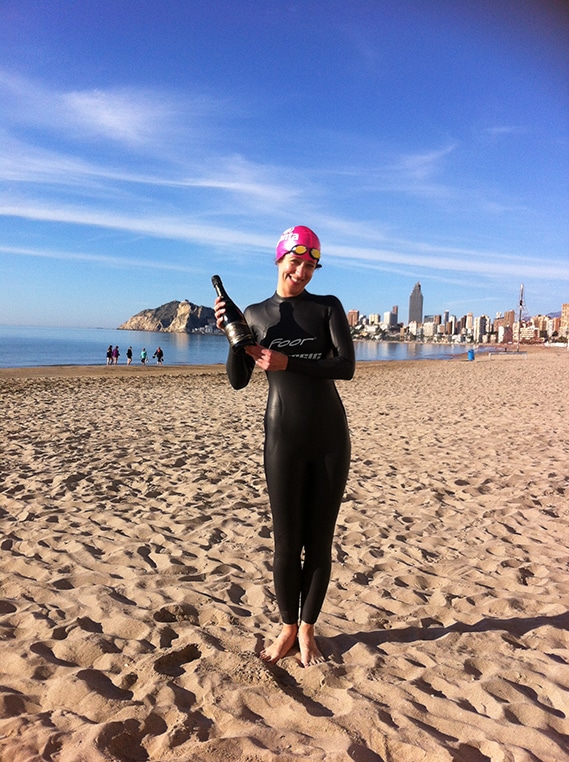 The final ride of my holiday took in yet another climb of the 2016 Vuelta, this time the climb from Callosa d’en Sarria to Tarbena. From the village of Bolulla this is a 6km climb with an average gradient of 5.5 %. After leaving the village of Tarbena I climbed a bit further towards Casas de Bixauca before the steep descent into Castell de Castells and then rode the lovely sweeping low gradient descent into Parcent before heading back to Benidorm. Team BMC can sometimes be spotted on the road between Castell and Parcent- as it is one of the few fairly flay roads in the area they use if for their sprint training. However, as it was Christmas week they were back home with their loved ones until their next camp in the spring.

As it was Christmas, my partner and father were with me, which meant that I didn’t do as many rides as I normally would but by the end of my stay I had covered 660 kilometres, swam a couple of times in the sea and enjoyed a number of runs, which is still a lot more than I would have done back in the cold UK! Below are the rides I completed, which you could try if you visit the region.

Helen hired her bike from Ciclo Costa Blanca http://www.ciclocostablanca.com/ and stayed at the Aparthotel Terralta in Benidorm http://www.apartamentos-terralta.com/

Helen is a former age group World and European Duathlon champion and European Triathlon champion. In 2015 Helen was part of the One Day Ahead team which raised £1m for Cure Leukaemia by riding the entire route of the Tour de France one day ahead of the pros. In 2017 she is moving to quadrathlons and will be targeting the British Quadrathlon Series. You can follow her on Twitter via @helengoth.