With travel becoming easier again it’s time to start planning your cycling trips. Here are our five best picks for a two wheeled holiday in Europe.

Of course, wherever you go, make sure your sports travel insurance covers you for your choice of activity. SportsCover Direct offers a range of insurance options such as Cycling Travel Insurance and Golf Insurance so make sure you’re covered!

In the winter months lots of the pro-cycling teams head to the Costa Blanca in Spain. From December to February, you will spot famous cyclists riding in the mountains behind the well-known resorts of Benidorm and Denia – and if it’s the place the pros choose, you know that it’s the best place!

The obvious reason to head here in the winter is the weather. When the temperature plummets in the UK, the Costa Blanca has an average December temperature of 17.9 degrees with many days enjoying temperatures in the low 20s. It’s not as hot as the Canary Islands in the winter but there are many more reasons to head here than just the climate. Lots of the local roads and climbs feature year after year in the Veuelta a Espana, the Spanish Grand Tour and it’s great fun to try out these famous ascents and spot the names of the pros painted onto the roads.

Other reasons to head here include the quiet roads, good surface, cheap accommodation and hotels that are bike friendly. I return to Benidorm every winter to feel the sun on my back whilst riding, and this year, after not being able to visit in 2021, due to the pandemic, it felt better than ever! 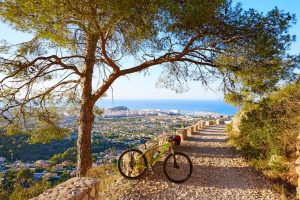 Since 2011 the Copenhagenize Index has been measuring which City in Europe is the best for cycling. According to the survey, in 2021 the most bike friendly city was Copenhagen, making it a great city to explore by bike. Indeed, the Danish Capital has been the top ranking city since 2015!

The city benefits from big investment in cycling infrastructure, including new cycle bridges, 167 kilometres of new cycle paths into the surrounding countryside, as well as parking, lighting, signage and repair stations. A bike ride or tour is a great way to explore and visit the sights and in July this year, the Tour de France Grand Départ is in Copenhagen, so you can combine a city break with watching the pros and cycling the route of the Prologue.

There are lots of bike hire, tour options and more information on riding and exploring the city on two wheels. You can find all this information on the Visit Copenhagen website. 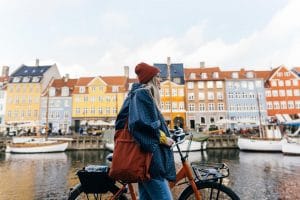 When you think of cycle paths you probably think of a small stretch of bike lane in a town. However, the Danube Cycle Path is no ordinary cycle path. Running for 1,200 kilometres from Donaueschingen in Germany to the Hungarian capital of Budapest via Austria and Slovakia, it is one of the most scenic cycling routes in Europe.

The path runs parallel to the famous river and the flat and well-maintained surface means that it is suitable for any ability. There is plenty to see on route, including vineyards, fortresses and monasteries and the path calls at cities including Ulm, Passau, Linz, Vienna and Bratislava.

If you are brave, you can cycle the entire route, or simply just pick a section. It is advisable to cycle downstream, and the most popular section is from Passau, Germany to Vienna which is 320km/200miles in length. You can go with a tour company or on your own, as the route is easy to follow. There is plenty of accommodation on route and since 2020 there is even a cyclist-friendly bus service from Klosterneuburg (outside Vienna) to Passau, to get you back to the start if you need that option. 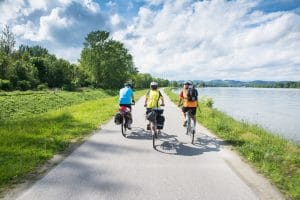 There are so many amazing mountain biking destinations in Europe, including the Dolomites in Italy, Hafjell Bike Park in Norway and Châtel in the French Alps, to name just a few. However, the thing that makes Madeira stand out is the fact that you can mountain bike there all year round, unlike many other European mountain bike destinations, which are covered in snow in the winter months.

Located in the middle of the Atlantic, the average annual temperature in Madeira is about 20 degrees, whilst being only a few hours flight time away from the UK.  Although it doesn’t have as many bike parks as other more established European resorts, there is a real variety of riding on offer, including cross-country, enduro, downhill, and all-mountain and something to suit all abilities.

You can explore the entire island from mountain tops to coastlines, cycling through several microclimates, which means you can cycle along dry ridgelines and through lush verdant groves in a single ride. The main tour operator is Free Ride Madeira, who have built a sustainable trail network around the whole Island. 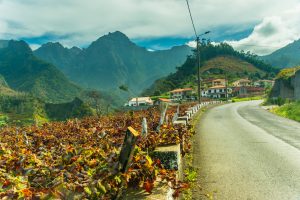 Best for watching (whilst riding)

Of course, the most iconic race to see is the Tour de France and watching from the bike is the best way to spectate. With roads being closed hours before the peloton speeds through, it is difficult to get about by car, but having a bike means you can get close to a stage start or finish or even up one of the infamous climbs to get a great vantage point.

There are a number of companies that offer watch and ride type packages, where you can ride some of the roads and climbs of a stage and watch the pros race by. That way, all the logistics, which can be tricky during the Tour, can be left to someone else! One operator is Marmot Tours, who have been offering Tour de France packages for over 15 years. You can even ride the entire 21 stages of the Tour one week ahead of the pros with ‘Le Loop’ but having ridden the entire route of the Tour de France for the Cure Leukaemia charity in 2015, I can definitely say that it is not for the faint hearted! 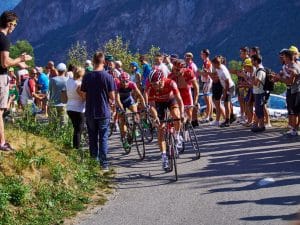 Helen is the former British Quadrathlon (swim/kayak/bike/run) Champion and British Quadrathlon Trophy Series winner. She was also the 2019 middle distance World Quadrathlon champion in her age group and the 2018 age group World Cup Series winner and sprint distance World Champion. Before turning to quadrathlon, Helen was age group World and European Duathlon champion and European Triathlon champion. In 2015 she was part of the One Day Ahead team, which raised £1m for Cure Leukaemia by riding the entire route of the Tour de France one day ahead of the pros. This year she is turning her attention to Stand Up Paddleboard racing. You can follow her on Twitter via @helengoth.