Biking is one of the fastest-growing types of outdoor recreation and tourism in the world, with an estimated 48 million people cycling per year. Many cities now offer cycling tours and trails which allow visitors to slow down while on holiday and pay attention to the sights around them.

To discover which bike tours and trails around the world are the best rated along with those that are most instagrammable, we have analysed data on TripAdvisor from 25 of the world’s most popular countries for bike riding. 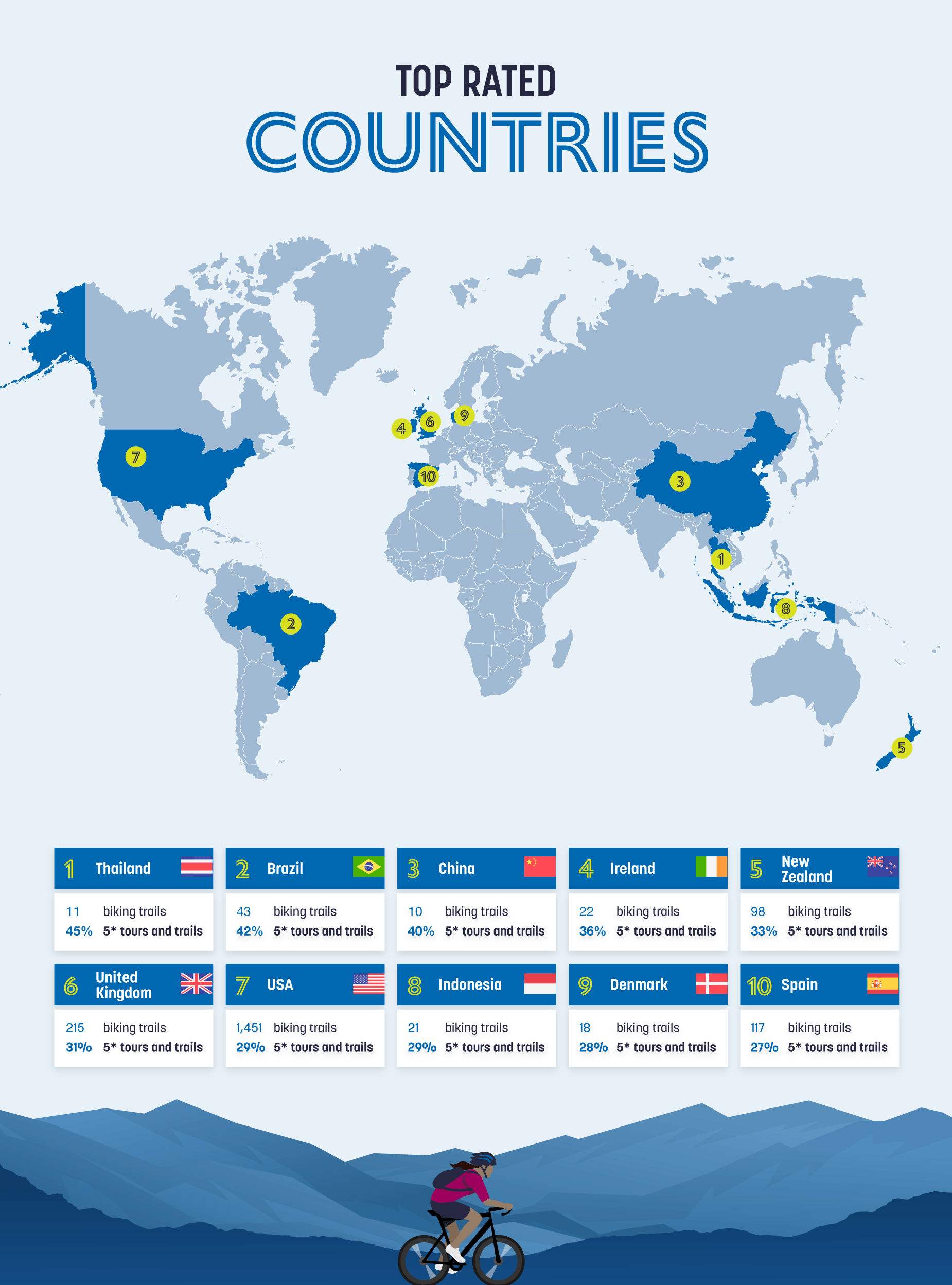 The best-rated tour in Thailand (which holds the highest percentage of 5 star trails) is through Sai Yok. Cycling enthusiasts can ride past the sights of the infamous Burma railway and also explore the rugged, beautiful landscape of mountains, waterfalls and riverside settings.

If you wish to cycle through Brazil, the top-rated trail is ‘Rota Aventura Trilhas de Bike’ which has 416 5 star reviews. This route offers tourists a different way to visit Bonito, where cyclists can stop off and bathe in crystal clear rivers to really connect with nature.

China has the third-highest percentage (40%) of 5 star trails and tours on TripAdvisor. The best-rated trail runs through Yangshuo. With quiet country roads, winding through dozens of bamboo-lined river valleys and local villages, for many, experiencing the mountain scenery by bike is the highlight of their time in China.

Ireland’s, The Great Western Greenway, is the best-rated bike tour in the country with 1,183 5 star reviews. Cyclists can take in the vast views from Mallaranny to Newport. With spectacular views of the scenery, it offers riders the opportunity for a peaceful trip.

33% of the biking trails in New Zealand are rated 5 stars, making it the fifth top-rated country in the world for biking trails and tours. The best-rated tour in New Zealand is the Otago Central Rail Trail. This cycleway takes cycling enthusiasts through 152km of the landscape where they can discover historic villages, local food and drink, and travel through untamed natural environments. 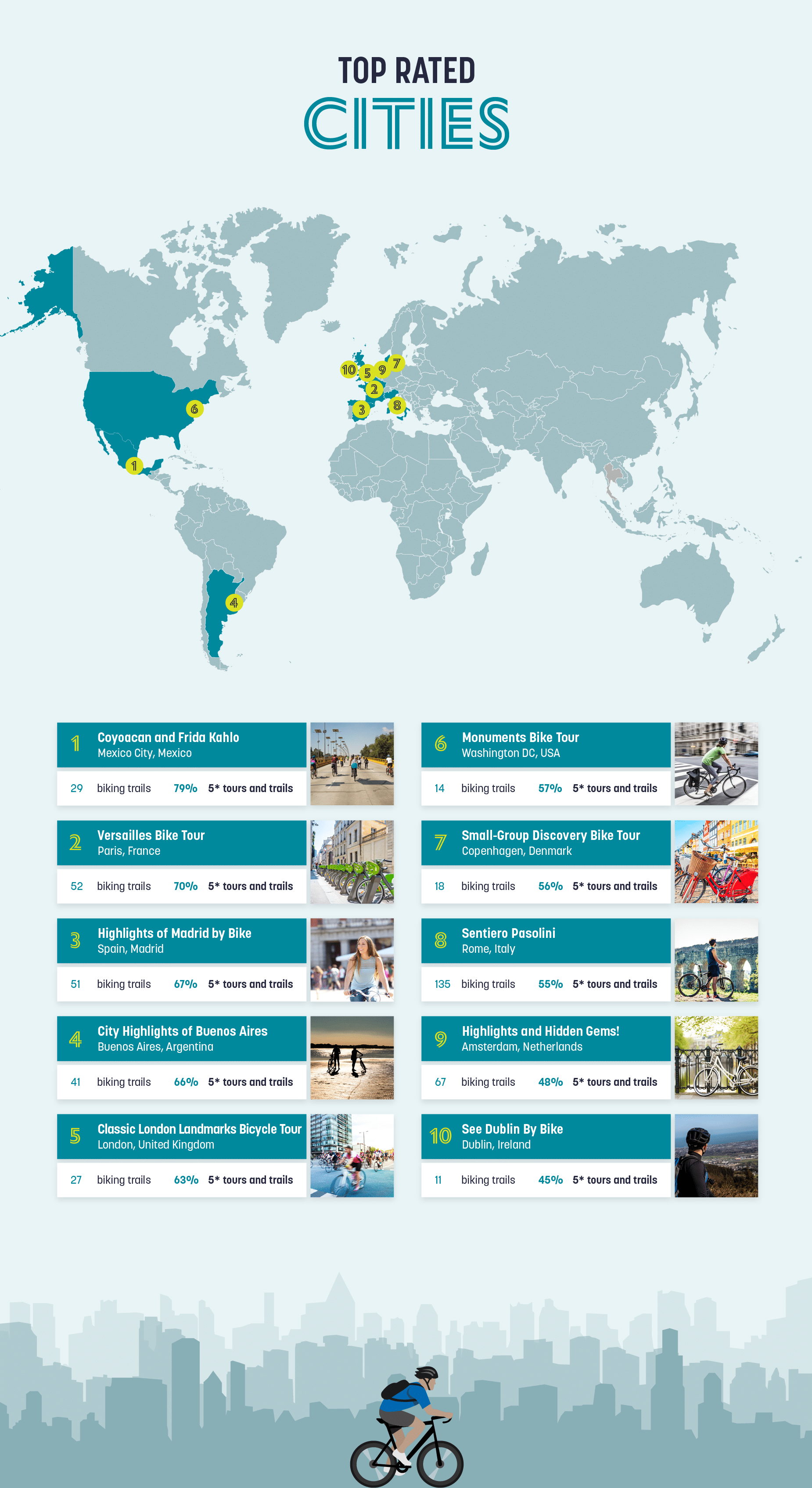 Mexico City is revealed as the top-rated city for bike tours and trails, with 79% of them being rated 5 stars. The top-rated tour is routed through the Coyoacan arts district where Frida Kahlo spent most of her life. This tour sees visitors jump on their bicycles and explore the trendy bars, the colourful arts hub and visit Frida Kahlo’s former home.

Paris is the second top-rated city for bike trips, and the best-rated ride is the Versailles Bike Tour. Cycling enthusiasts can take a tour of one of the world’s great palaces and explore the surrounding areas enjoying this one of a kind Versailles experience.

Madrid is an obvious choice for the third top-rated city for bike tours and trails. The Highlights of Madrid by bike is a firm favourite with visitors as this is the top-rated tour on TripAdvisor. With many significant landmarks such as the Puerta del Sol and the Royal Palace, visiting them all on foot can be a challenge so tourists can hop on board a bicycle to cover more ground than they would on foot, and also learn about the city’s history from their tour guide.

66% of the bike tours and trails in Buenos Aires are rated five stars, making it the fourth top-rated city in the world. The Half-Day City Highlights tour is the top-rate, and lets tourists travel like a local. Pedalling through neighbourhoods such as Puerto Madera, cyclists can stop in La Boca’s Caminito, a street museum with much to see.

London’s classic landmarks bicycle tour is top-rated with 630 5 star reviews. Those taking part in this tour will experience all that London has to offer, from Westminster Abbey, Buckingham Palace and Covent Garden. This tour will take you along the riverside, side roads and alleyways making all travellers feel like proper Londoners. 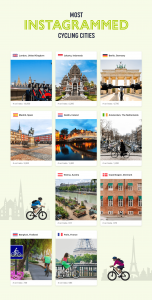 Some cities may be the best rated on Tripadvisor, but what makes us want to hop off our bikes and post on Instagram? Researching which cities had the most hashtags on Instagram for cycling such as #londoncycling our team can reveal the most Instagrammed cycling city is London.

Thinking of a bike tour?

If any of the bike tours mentioned in the research are of interest, it’s important to know that although cycle touring is not considered an extreme sport, many travel insurance companies still won’t provide cover for this.

Make sure you are sufficiently covered for the activities you plan on doing, so if you are hoping to take part in cycle touring when on holiday we highly recommend Cycle Touring Insurance which will provide you with the specific protection you need.

We used the capital cities of 25 of the most popular cities for bike riding and looked at the number of tours and trails and the number of 5 stars rated. The cities that had the highest percentage of 5-star tours were revealed to be the best.