Around the world, there are sports that have huge followings, with football topping the list as the most popular. There are also many sports that are steadily growing in popularity due to economic and cultural factors, as well as online trends and accessibility to participate.

The team at SportsCover Direct have analysed the volume of Google searches for sports in 23 of the world’s most populated countries to uncover which sports have seen the most growth during 2022. 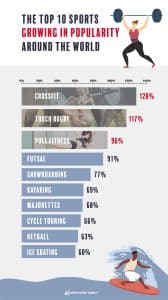 The top 10 Sports Growing in Popularity Around the World

CrossFit has seen the most growth in searches year-on-year in Google, with an average of 128% across 23 of the world’s most populated countries. The high-intensity interval training (HIIT) is Kate Middleton’s favourite workout and can be done by beginners or the advanced. Not only does the workout combine weight and strength training, but it also has a huge community attached to it, making it a great sport for socialising as well as fitness.

Another sport which has seen a burst of searches in 2022 is touch rugby with a 117% year on year increase. The sport differs from rugby union, as in touch rugby, ball carriers are touched by opposing players instead of being tackled. There are many benefits to the sport, as it improves cardiovascular fitness with some participants claiming it creates a party atmosphere too!

Pole fitness is another breakthrough sport of 2022. Pole dancing was formally recognised by the Global Association of International Sports Federation (GAISF) as a sport in 2017 and has since seen a growth in popularity even featuring in the Super Bowl halftime show in 2020. Participants will need to use strength, flexibility, balance, coordination and timing and rhythm so it’s not for the faint-hearted! 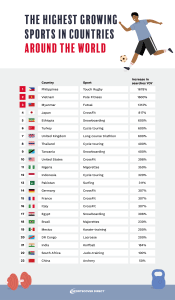 The highest growing sports in countries around the world

Unsurprisingly, different sports are seeing breakouts in popularity in different countries around the world. Analysing the searches for the 23 most populated countries revealed sports such as surfing, archery, cycle touring and snowboarding have all seen a huge growth in searches.

In Myanmar, the sport which saw the most growth in searches was futsal. The sport is a small-sided indoor version of football, which has fewer players than a standard football team and a smaller, harder ball which is less bouncy. In April 2022, the Myanmar team had their first-ever win over Australia in the sport in the AFF Futsal Championship.

The sport majorettes climbed the most in searches in Brazil in 2022 with a 350% increase in Google searches! The sport is a combination of baton twirling, dancing, movement and gymnastics.

CrossFit was an emerging sport in many countries, seeing the most growth in Japan, the United States, Germany, France and Italy. Around 4 million people around the world do CrossFit and it has seen incredible growth since it was founded by gymnast Greg Glassman in 2000.

To uncover which sports were growing in popularity across the world, we used a seed list of over 100 sports and used Google’s keyword planner to calculate the number of searches each of these sports had between September 2021-September 2022 in 23 of the world’s most populated countries.

The top 10 sports growing in popularity was calculated by averaging out the year-on-year growth from the 23 countries.